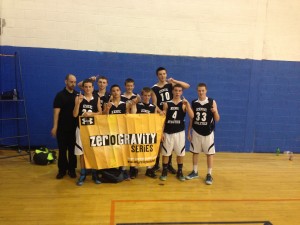 The Edge Athletics 15u team beat Castle Athletics in the championship game of the Zero Gravity War For Westchester tournament this past weekend.  Castle Athletics, considered one of the top teams in the area, was a 20 point favorite going into the game.   Playing without center James Anozie due to a sprained ankle, the Edge boys knew they would have to just out hustle their opponents.  And they did just that.  Cameron Abalos led his team in that category, playing both ends of the court.  In an exciting back and forth game, and a wild last minute and a half,  the Edge found themselves in a tie game with just under 30 seconds to go…with the ball.  Coach Peek instructed his team to hold the ball for a last shot.  While Abalos’s shot with 7 seconds was off the mark, Zach Dingee found the ball in his hands off an offensive rebound and launched it from behind the arc  just before the buzzer sounded.  And, yes, it went it!  Edge wins by three.

Congratulations to all the boys on the 15u team!