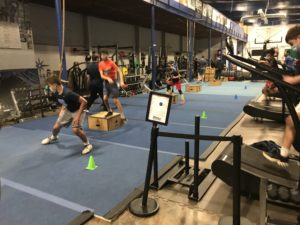 Some parents had questions about why we chose NorthStar and if NorthStar would be as diligent as we are with our Covid-19 protocols. Earlier this evening, I paid a visit to their facility to watch some of our younger athletes in action. I am pleased to say that I felt good being in the building. The trainer, Mike, not only pushed the athletes hard, but strictly adhered to the protocols they had in place. Mike wouldn’t even let me past the entrance way!

We all understand that we need to participate in these activities in a safe way and according to the guidelines that are provided to us. I just want to let you know that based on what I know and what I saw (and since parents are not permitted inside, sound familiar?) NorthStar is doing what they need to do to keep the risk as minimal as possible. The trainers were also great with the kids, pushing them to their limits as I hoped and knew they would.

This was no surprise to me. It’s not my first experience with NorthStar and although teaming up with them was not a new concept to them it just hasn’t been necessary for us…until now. Here’s why.

As our fall program was coming to an end, the uncertainty of our high school season was on the forefront of everyone’s mind. It was looking like the seemingly inevitable events would settle in. November 30th would come and go and any meaningful preseason would be highly unlikely. Many parents and athletes asked me if Edge would run some type of program should this happen. Although I had already given this a lot of thought, I was hoping that I would not have to execute on any of those thoughts.

Unfortunately, that reality hit and High School basketball has been delayed. The new projected start date would give us another 4 week vacuum that needed to be filled. With no pre-season and no available AAU tournaments, I wanted to give our athletes a chance to really prepare for the new start date and for a condensed season. I, therefore, contacted Jerry North, founder of NorthStar Sports, to see if we could put together a concentrated, 4 week program. Why NorthStar? I didn’t simply take someone’s recommendation and then look them up online.

Jerry and I go back many years. I was there when Jerry (and Jasmine) first opened their doors on Sheafe Road. I remember Jerry telling me that “he was going to hang a shingle outside the door and hope someone would walk in.” That someone was me.

All that time ago, I walked in the front door out of curiosity when I saw a moving truck in the parking lot and thought maybe the building might be for sale. As it turns out, Jerry was moving in. I remember actually helping Jerry unpack that day and arrange some of his equipment. In return, Jerry offered me some training sessions. I took him up on it and although I was considerably younger at the time, I still struggled with the workout. When we were finished, I told Jerry in a proud way that I barely made it through but did it! Jerry looked at me with this devilish smile and said, “made it through? That was just the warmup.”

At that point, I realized what I was getting myself into, but it aligned with something that I preach all the time and is where the name “Edge Athletics” comes from. That is to learn how to push yourself beyond your perceived limits. “Push yourself to the Edge and expand your envelope.” My two younger boys, Kelby and Kyle, bought into the process and began training with Jerry at 10 years old. They trained with him right through their very successful high school and college careers.

More than 15 years after meeting them, I stayed in touch with Jerry and Jasmine as their business changed locations and grew in size and reputation. I considered him then, and still consider him now, as being the best in his field. What Jerry does is more than train athletes. He builds character and confidence and helps athletes overachieve their athletic goals. He has developed a strong business and although no one can replicate what he does, he has developed qualified and extraordinary trainers.

I share this with you to give you insight as to why I wanted our kids to train at NorthStar over other training options. My own sons trained with Jerry and I have recommended and sent countless athletes to him. Jerry came in every day to work with our athletes during the Edge Athletics four-day overnight top 20 players camp that we ran last year. And now, when in need of a way to best prepare our athletes for the January 4th start date, there was no better option than to have our kids workout four days a week instead of two or three.

The sessions with Edge are giving our athletes the best we can give them under the circumstances. Our younger groups are working their butts off and our older group is getting the college exposure they need that would generally come during the high school season. Add the workouts at NorthStar, and I become increasingly optimistic about how our athletes will perform once the season hopefully begins. All while keeping the safety of our athletes, coaches, and trainers our number one priority and guide every decision we make.