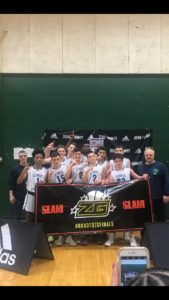 Skidmore College – The Edge athletics 16u team closed out the weekend with a win capturing the Zero Gravity Thoroughbred Regional championship in Saratoga this weekend.  Teams from all over the state and beyond competed in the weekend tournament.  The Edge boys defeated North Warren Elite before heading into the final game against Burnt Hills.  In that game, Dominic Henry’s (Our Lady of Lourdes High School) steal and basket in the remaining seconds sealed the 42-38 victory.  “It certainly gave the fans some exciting basketball to watch,” said Anthony LaRocca, the coach of the 16u.  “Both teams played hard and tough, but with tenacious and efficient defense, we were able to hold back a late run from the Burnt Hills team,” LaRocca added.

This team has gelled in a very short time.  With only five practices in three weeks, the boys have learned to play with each other despite coming from multiple school districts.  In fact, many of the boys didn’t even know each other prior to being selected to represent Edge Athletics.  “I can’t single out any one player.  They all just seemed to come together all at the same time.  My kudos go out to all of them for making that happen.” LaRocca said.

Thanks to all of our parents for coming out and supporting all of the teams this weekend.  Although it was only the 16u that brought home the T’s, all of the teams competed very well in their first tournament.