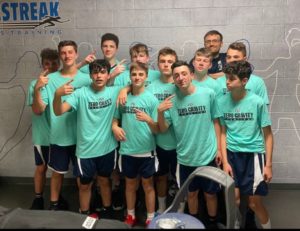 Ardsely, NY – In a weekend that featured two of the top programs in their respective areas for AAU basketball, Edge Athletics defeated Chris Ward Basketball (CWB) in the 8th grade division championship game on Sunday afternoon 59-37 in the Zero Gravity War on the Floor Tri State tournament. in the process they tied the overall weekend series between the two clubs at 3-3.

Going 3-0 in their bracket, the Edge boys received a first round bye in playoff action. After defeating CWB in a hotly contested matchup on Saturday where Edge showed its ability to shoot from the perimeter, CWB game out in a straight man defense in Sunday’s championship game and rematch.

Edge went to work right from the tipoff, pushing the ball in transition that led to layups and uncontested 3 point shot attempts. They also were able to execute in the half court set, moving without the ball to free up their shooters, which also provided driving lanes to the basket.

“That’s been a point of emphasis in practices the last few weeks,” said Matt Covucci, the 8th grade Edge coach. “We spent a considerable amount of time working on our shooters coming off screens for the 3 point shot, which created driving lanes as the defense was focused on the perimeter,” he added.

That work paid off as Edge took a commanding 42-19 half time lead. In addition to the practice work, Matt Partridge (John Jay) became a one man wrecking crew in the first half, putting up 18 points in 16 minutes. Partridge continued to lead the offense like he has all season, hitting from behind the arc and creating and finding driving lanes to the basket.

“Matt was awesome today. He not only hit the three ball, but he scored off the dribble and led our offense,” Covucci said. “He’s been our court general all season long, but today he was more determined after losing in the championship game last weekend,” his coach added.

But it wasn’t just Partridge that was responsible for the team’s success. Andrew Kozak (Lourdes) and Chris DeNatale (Marlboro) were great in transition and were able to penetrate and kick out of the half court offense. Add Tommy Simpson’s (Highland) hot hand in the first half where he knocked down several trey’s and CWB was put on tilt.

To make matters worse for CWB, Edge’s big man Zack Hart (Lourdes) showed exceptional inside/outside versatility, finishing at the rim but also finding shooters at the perimeter after the defenders had no choice but to collapse on him.

“Zack played great today. He really showed his potential to be a dominating factor. His size, ability to handle and pass the ball, and midrange game is going to cause headaches for opponents,” Covucci said of his 6’3″ power forward.

If the combination of Partridge, Kozak, DeNatale, Simpson, and Hart weren’t enough, add in the rest of the Edge squad that all made significant contributions and you have that total team effort that every coach loves to see.

“All the players off the bench continued the hot offense. Great Ball movement, great cutting, great screening without the ball for open shots. Great offense all week. Jeremiah (Anson – John Jay) probably had 5 threes this weekend. Aidan (Sullivan) moved the ball great and set up all his teammates for easy looks. Sal (Montaperto – Marlboro) and Austin (Jorgensen – Lourdes) scored on the interior often and crashed the offensive glass. Cam (Duro – Ketcham) was a great cutter and penetrator. Tyler (Bonacic) was a great cutter, hit shots and punctuated the the final game with a no-look pass for an easy layup for his teammate,” Covucci said with a high sense of pride.

And proud he should be. His teams defense was spot on, something that the Edge program takes great pride in teaching. Ball pressure, intensity, and communication are all part of the Edge’s unique defensive strategy and all were on display this weekend.

“The defense was excellent all weekend. Tyler was intense on the ball. Chris and Andrew teamed up to wreak havoc on and off the ball, with Cam and Jeremiah coming off the bench to continue the great pressure,” Covucci continued with that same proud tone.

Aside from the success the Edge boys enjoyed this weekend, the most important outcome of the season is the progress they made since they started in early March. Practices were consistent despite having to deal with multiple athletes playing multiple sports in the spring because of the havoc that Covid wreaked on the youth sports schedule. The team stayed focused and worked on the small details of the game that often get ignored.

Those details are the main reason why this Edge team finished 8-2 down the stretch and making it to two championship games in the last two weekends. Certainly a great way to end the season!