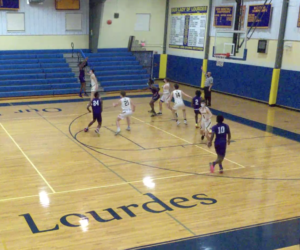 The Our Lady of Lourdes boys basketball team lost a tough battle to AA power New Rochelle in a non league matchup on Thursday night. Lourdes picked up the game to round out its limited Covid-19 schedule knowing that New Rochelle would add a big challenge to an already competitive AA league.

From the opening tip, the Warriors looked liked they belonged on the court with the perennial power that featured Jason McGhee and Promise Opurum, two of the top players in all of section I. They mastered both the offensive and defensive ends in the first half going up 14 (41-27) at the half behind the powerful tandem of Andrew Rappleyea and Jason Schofield. That tandem was directed by Lourdes point guard Willy Hart. Together, they seemingly took New Rochelle off guard and looked like they could roll to victory.

Rappleyea dominated all night long notching a career high 32 points and 9 rebounds, demonstrating skillful drives and power moves to the basket. Schofield, who has quickly established himself as one of the top sophomores in the section, complimented Rappleyea with a nifty inside/outside game. And Hart commanded the activity with the ball in his hands most of the time against the intense pressure of the New Ro defense.

But New Rochelle came out in the second half with a counter approach. “I thought we handled their man to man defense as well as anyone could,” said warrior coach Jim Santoro. “We controlled the tempo in the first half, pushing the ball in transition and then showing patience in the half court,” he added.

So what changed in the second half? New Rochelle switched to a three quarter court 1-2-2 press and then dropped into a half court zone. This seemed to slow the Warriors down and threw them off their rhythm. “Definitely,” Santoro said. “They made an effective adjustment in the second half and that changed the entire feel of the game,” he said.

“That definitely hurt us,” Santoro said. With Schofield and Pelish in foul trouble, Lourdes had to go their bench with a smaller lineup. “Although I thought Chris Faughnan did a great job coming in for Jason and I thought our guard play was fine off the bench, we wound up giving up a little bit of size and power,” Santoro added.

Lourdes led the entire way even through the second half. It wasn’t even a late surge by New Rochelle that changed the tide, it was more of a slow but steady chip away. With 2:11 left in the fourth quarter, Lourdes was holding onto to a five point lead (71-66). Promise Opurum’s inside basket cut the lead to three. William Breyon, New Ro’s 6’6″ forward, got a piece of a Willy Hart drive, followed by an Opurum “and one” at the other end to tie it at 71 also sending Schofield to the bench with his fifth foul.

New Rochelle would take its first lead of the game with 40 seconds to go, but Willy Hart tied it up at the foul line with 17 seconds left, setting up a dramatic finish. Tied at 73, New Rochelle got the ball into McGhee’s hands and McGhee nailed a deep three just before the buzzer sounded giving New Rochelle the come-from-behind victory.

It was a devastating loss for the Warriors but there was a lot to take away from it. “Tonight we confirmed that we could compete with the best teams in the section if not the state,” Santoro said of his Warriors. “We came up short, but I’m still pleased with our performance. Hats off to New Rochelle, they didn’t quit and did what great teams do. We now have to just bounce back tomorrow,” Santoro added.

And bounce back they must do. The Warriors face their crosstown rival Poughkeepsie Pioneers who they lost to in the opening game of the season. It’s a matchup that could decide the league. But if the Warriors can bring the level of play they demonstrated tonight, and stay out of foul trouble, they will give the Pioneers all they can handle.